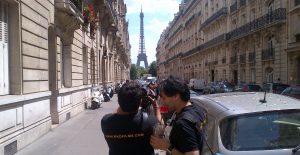 Celebrating 10 years of RKD Films video production services; welcome to our new website.  Thank you to everyone who has supported us over the years, we are so grateful for every production that we have had the privilege to work on.  We are proud because we believe every single video has made an active difference to peoples lives.  The award winning “Talking Lives, Talking Communities“, was one of our first videos, which helped build community cohesion and breakdown post code barriers amongst the youth in disadvantaged areas.

Our most recent video (which is available as a sample on our home page) “Living Well with Dementia“, is to be used within the south Asian community,  it was commissioned by Birmingham and Solihull Mental Health NHS Foundation Trust.  This video was completely filmed and edited in Hindi and we hope it will be a valuable resource for anyone who has recently been diagnosed with dementia or is caring for someone with dementia within the Asian community.

We like our films to have an impact and to create awareness or be used as a tool and we will continue to build strong relationships with contributors who let us into their lives to help tell their stories.

But where do we see RKD Films in the next 10 years, we hope to continue to make films and help clients tell their stories like Alstrom Syndrome and Action Against Medical Accidents.  We also hope to do more workshops and help young groups make quick turnaround short films like “Step Up“, or even assist Yell.com clients showcase their businesses, with short videos.

Whatever the project we hope we can guide and assist you to tell the story that you want.

We have also been busy making our own film with our partner company Quota Films.  “Who Killed British Cinema?” A feature documentary starring Sir Ben Kingsley, Sir Alan Parker, Ken Loach, Lord David Puttnam, Stephen Frears, Mike Hodges and a host of other well known names.  A film which we hope will make its own impact, due to be released later on in the year along with the accompanying book also titled “Who Killed British Cinema?”  After the release we hope to produce some more feature documentaries on topics that are not covered by the mainstream and maybe a drama or two.

Soon to be available on DVD, VOD, book and kindle via www.WhoKilledBritishCinema.com or www.QuotaFilms.com

In the meantime get in touch and we hope we can help you or follow us on twitter for updates.

Click here to assign a widget to this area.